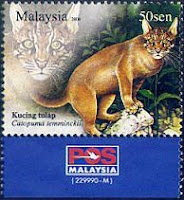 The Asian Golden Cat (Pardofelis temminckii, previously been placed in genera Catopuma, Profelis and Felis), also called the Asiatic Golden Cat and Temminck's Golden Cat, is a medium-sized wild cat (length 90 centimetres/36 in, plus 50 centimetre/20 in tail) weighing from 12 to 16 kilograms (26 to 35 lbs). In captivity this species can live up to 20 years, but its average lifespan in the wild is likely far shorter. While the fur is mostly foxy red or golden brown, black or grey colour variants may also be found. Normally, the coat is plain, save for some spots on the underside, and sometimes very faint spotting on the rest of the coat. However, in China there is a colour variant with leopard-like spots, which resembles a Leopard Cat. This spotted fur is a recessive characteristic, i.e. when a spotted and a plain cat interbreed, the young get plain fur. 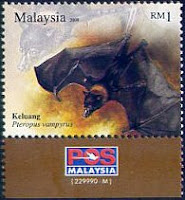 Bats of the genus Pteropus, belonging to the Megachiroptera sub-order, are the largest bats in the world. They are commonly known as the Fruit Bats or Flying Foxes among other numerous colloquial names. They live in the tropics and subtropics of Asia (including the Indian subcontinent), Australia, Oceania, islands off East Africa (but not the mainland Africa), and a number of remote oceanic islands in both the Indian and Pacific Oceans.The oldest ancestors of the genus Pteropus to be unearthed appear in the fossil record almost exactly as they are today, the only notable differences being early flight adaptations such as a tail for stabilizing. The oldest megachiropteran is dated at around 35 million years ago, but the preceding gap in the fossil record makes their true lineage unknown.Characteristically, all species of flying foxes only feed on nectar, blossom, pollen, and fruit, which explains their limited tropical distribution. They do not possess echolocation, a feature which helps the other sub-order of bats, the Microbats, locate and catch prey such as insects in mid-air. Instead, smell and eyesight are very well-developed in flying foxes. Feeding ranges can reach up to 40 miles. When it locates food, the flying fox "crashes" into foliage and grabs for it. It may also attempt to catch hold of a branch with its hind feet, then swing upside down — once attached and hanging, the fox draws food to its mouth with one of its hind feet or with the clawed thumbs at the top of its wings.