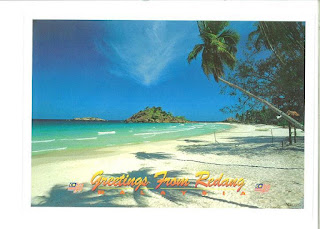 Another of those lovely cards is yours.
Just make them yours by asking me.


Redang Island, locally known as Pulau Redang or just "Redang" is one of the largest islands off the east coast of Malaysia. It is one of nine islands, which form a marine park, and which offer snorkeling and diving opportunities. Access is from Merang orKuala Terengganu on boats operated by the resorts. Redang Airport is a small airport with services operated by Berjaya Air from Singapore (Changi Airport) and Kuala Lumpur (Sultan Abdul Aziz Shah Airport).
The island is also an important conservation site for sea turtles. Previously, the indiscriminate economic exploitation of turtle eggs had caused fewer turtles returning to nest on the island. This has led the Terengganu state government to set up theKoperasi Setiajaya Pulau Redang in 1989, a cooperative aiming to develop and manage socio-economic programmes that could improve the livelihood of Pulau Redang locals without endangering its natural resources.[citation needed]
The Pulau Redang archipelago comprises Pulau Redang, Pulau Lima, Pulau Paku Besar, Pulau Paku Kecil, Pulau Kerengga Kecil, Pulau Kerengga Besar, Pulau Ekor Tebu, Pulau Ling and Pulau Pinang. Pulau Redang is the biggest of all the islands in the Marine Park, measuring about 7 km long and 6 km wide. Its highest peak is Bukit Besar at 359 metres above sea level. The boundary of the Pulau Redang Marine Park is established by a line linking all points 2 nautical miles (3.7 km) from the shores of Pulau Redang, Pulau Lima, Pulau Ekor Tebu and Pulau Pinang. The other nearby islands of Pulau Perhentian Besar, Pulau Perhentian Kecil, Pulau Lang Tengah, Pulau Kapas and Pulau Susu Dara are also gazetted and protected as Marine Parks. Today, only the bigger islands like Redang, Lang Tengah, Perhentian and Kapas have resort facilities for visitors. The management of Marine Parks primarily involves protection of the sensitive marine and terrestrial ecosystems by controlling the impact from human activities. These include waste & pollution management and conservation of coral reefsand terrestrial habitats.
The 2000 film, Summer Holiday was filmed on the Laguna Redang resort, and a replica of the tea house now serves as the resort's gift shop.