Although this sheet and stamps were released many years back suddenly these pieces are available.Kindly contact me for details.

10th Men's Hockey World Cup 2002For the first time in the history of international hockey, Kuala Lumpur is the only city chosen as the World Cup more than once. The 10th men's Hockey World Cup will be held for more than 2 weeks starting from the 24th February till 9th March 2002. Countries participating to vie for this prestigious title includes from Europe, the defending champion Netherlands, European Champions Germany, 1998 World Cup runner-up Spain, England, Poland and Belgium. Asia has 5 nations participating for the first time - host nation Malaysia, Olympic silver medalist South Kore

a, four times World Cup titleholders Pakistan, past champion India and Japan. Argentina and World Cup debutantes Cuba are the representatives from the American continent while Olympic bronze medalist Australia and New Zealand bears the hopes of the Asia Pacific, South Africa, in the meantime is the sole entry from Africa. As the main venue for the tournament, the National Hockey Stadium Bukit Jalil, located 20 kms from the city will see 72 matches being played by 16 countries taking part. 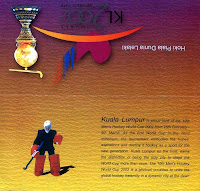 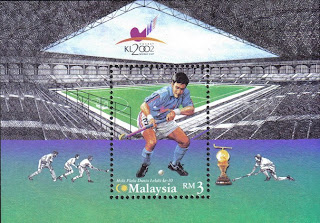 In conjunction with the 10th Men's World Cup Hockey held in Kuala Lumpur, Pos Malaysia Berhad took the initiative to record this 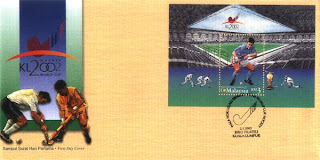 international acclaimed tournament by producing stamps and first day covers. These stamps priced at 30 sen, 50 sen and RM1, showcases paintings of world-class players in interesting moves.The National Hockey Stadium Bukit Jalil being the main venue of the event has been incorporated as the background of the Miniature Sheet, which can be obtained at RM3. This stamp collection is a must for all.